Cramming for hours may seem like a good way to learn, but if you spend too long studying at once, it is easy to over-do it and you are less likely to remember everything. It can also take the fun out of learning and make it feel more of a chore. Remember ‘little and often’.

It is good to set yourself a study target, of a certain number of hours per week, but what is more effective? A 3 hour session on a Sunday, or 30 minutes each day? How much can you remember only a few days after your 3 hour session? By studying in small chunks, the learning is more progressive, and it gives you the chance to use and practice what you have learned each day. Your memory will be refreshed and your learning capacity will be greater.

It is usually much easier and convenient to find a small amount of time each day, than to find a large amount in one day. You can study during break times, on your daily commute, or even in the bathroom. Most of us take our smartphones everywhere these days, so instead of playing games, why not make better use of the time and use an English learning app, or read an e-book?

If you think that you can’t spare 30 minutes every day you can break it down into even smaller chunks of 3 x 10 minute periods. The most important thing is that you do it every day. Of course if you are fortunate enough to have more spare time, you can increase your total daily study time, but I still recommend breaking it down into chunks of no more than 30 minutes each.

Give it a try, and let us know how it works for you.

A Picture Paints a Thousand Words!

Some say that this saying originated from the USA in the 1920’s, whereas others say it is an adaptation of an ancient Chinese proverb “A picture paints 10,000 words”. No matter where the saying came from, it is very useful to remember when learning something new, especially a language.

Look at a simple picture and describe it with one English word. Try not to think of it in your native language. Just look at the picture and say the main feature. 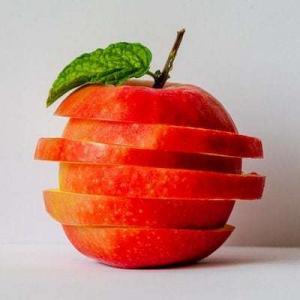 OK, you probably used a noun and said ‘apple’, or at least I hope you did.

This is great if you are a beginner, but now let’s take it to the next level, with two words.

I am guessing you would use an adjective and a noun such as ‘red apple’.

If you are really ambitious, you could aim for a thousand words, and post it in the comments box.

The point is, that as you build the picture in your mind, you also build your vocabulary associated with the picture, so that next time you see an apple, you think ‘apple’ and not the word in your native language. This is also true for the other elements of the picture, such as ‘red’, ‘sliced’, ‘leaf’ etc. 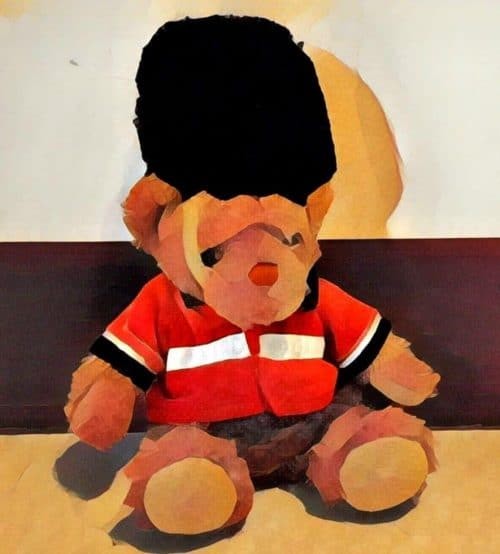 Now try the same principle with this picture:

‘toy brown bear with a jacket’

‘toy brown bear with a red jacket’, and so on.

Each time you look at the picture, try to find something new to add. You may not remember everything, but you will remember some of it.

This is a great technique that you can use yourself or with your children. Remember, there is no age too young, or too old to start learning new things.

Have you tried to memorise words from word lists? How effective was it? How many words could you remember the next week, day or even hour after you read them?

Not only is it boring, but it is also ineffective, and can be misleading. Many English words have multiple definitions and uses, and need to be used in the correct context.

Try to learn new vocabulary by using the new words in short and meaningful sentences or phrases. Write several for each word and then read them out a few times. The more crazy, or unusual you make your sentences, the more likely you are to remember the new vocabulary, and you can have some fun at the same time. 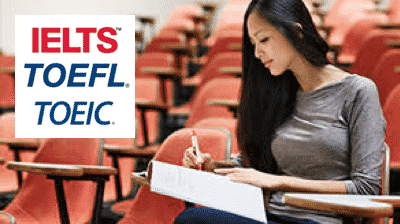 Do you want to work or study abroad? Do you need to pass an English test such as IELTS, TOEIC or TOEFL? Our English Exam Preparation classes will boost your confidence, increase your chances of a good test score, and give you a deep and meaningful understanding of English.

It may feel good to get a certificate that allows you to study or work abroad, but unless you can actually use the language well, you will need to work much harder to complete your major or succeed in your new position.

Don’t just learn how to pass the test. Learn the language, and the test will be easy.

Register now and save 30% on all Exam Prep classes during June. (Enter coupon code DRAGON30 at checkout).

As an English learner, how do you feel during a conversation with a native speaker? Which dog reflects your feelings? Vote now!

1. Don’t assume it is your fault if you don’t understand what the other person is saying, even if they are a native speaker.

2. There are hundreds of different accents and dialects within some countries, that even those speaking the ‘same’ language may find difficult to understand.

3. Perhaps the other person speaks quickly or quietly, or you may be in a noisy environment that makes it difficult to hear clearly.

4. Don’t be afraid to ask the other person to repeat what they said. You usually find that they will naturally slow down, speak louder, and may even soften their accent.

5. Be confident and don’t be afraid of making mistakes. You will learn from them.

Welcome to Interview English. After a long, successful and varied career in aviation, engineering, training, management and business, I settled in Asia, where I found an opportunity to teach and develop Aviation English. I had the background in aviation but at that time was not qualified to teach English as a foreign language (TEFL). Once qualified, I gained experience teaching for one of the world’s largest online English schools, and after a short time, I was lucky to be ranked by the students as one of the most popular teachers. I had discovered my passion for teaching.

I had the privilege of teaching many amazing people from a cross section of society, including young children to high school and college graduates, government officials, professors, doctors, lawyers, bankers, pilots, engineers, business managers, and more. Students seemed to enjoy my teaching methods, regardless of their age, gender, academic level, or status. I often asked myself why? And, sometimes students would let me know. The key seemed to be that they enjoyed my classes. They said they felt relaxed, and that they learned much more than just English.

I believe it is important to build a good teacher student relationship and to understand the learning styles and the needs of every student before you can adapt to the most appropriate teaching style. It is important for a teacher to give the student their full attention during a class, and most importantly to make it an enjoyable experience. We all learn more when we are doing something we like.

I started Interview English Ltd. with the aim of providing a professional service to professional people, to the highest standards in teaching, materials and customer service. All teachers that work with us must be Native-English Speakers, and they should also have experience in their specialist fields such as engineering, business etc. This ensures that the students can achieve a more deep and meaningful understanding of the English language associated with their profession.

Our interview coaching and mock interview services have helped many people towards getting their dream position, and it is immensely satisfying to us when we receive personal messages of thanks from our students.

Thank you to all of our students who have helped us to get this far, and we look forward to welcoming all new students to our learning community.